In the North of Mexico City, next to highway 57 (Mexico City – Queretaro) a Rail terminal is reconstructed by using PowerCem based Technology. The terminal is heavily used, on this 70.000 m 2 terminal, every day 2.000 containers are handled. The product RoadCem is used to strengthen the current hydraulic unbound material.

Due to the use of RoadCem an economic solution is achieved with an improved quality. Which leads to a safer and a higher volume of handling the container movements.

By using RoadCem an impermeable stabilization is achieved, which will prevent the occurrence of potholes. Due to the unique mechanical properties of a RoadCem stabilization (High flexibility and strength) the pavement structure is able to bear high traffic loads like the Reach stackers without the occurrence of deformations or cracks. During the reconstruction of the terminal, the heavily used terminal was operational and the reconstruction had to be finished as early as possible. By using RoadCem this is possible because the existing granular material is used, so there is no need for excavation and import of additional granular materials.

The RoadCem is mixed with the existing hydraulic unbound material. The total thickness of the stabilization is 0,4 m, above a sandy gravel existing base.

On the areas where the reach stackers are driving and turning, high horizontal friction forces occur. To increase the durability of the RoadCem stabilization a layer of 0,035 m of asphalt assures a long life time period [> 20 years] of the stabilization.

By constructing a terminal it is important that the level of the future stabilization is prepared in advance before mixing the RoadCem and the cement.

To create a stabilization surface which is highly resistant against high horizontal friction forces it is required to have a surface where the pores are closed.

Has a large worldwide team of enthusiastic personnel and partners

We are an innovative company

Set up in 1996 that has already been a fixture on the market for years.

Is located in Moerdijk

Moerdijk is a logistically strategic port between seaports Rotterdam and Antwerp 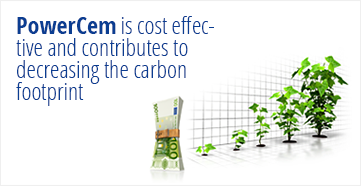